Choi Associated Press (Shanghai, edit Huangjun Zhi) news, Goldman Sachs (Goldman Sachs) on Tuesday in a report that copper in achieving decarbonization and the use of renewable energy sources is crucial, the current market is facing tight supply situation, which could Will make copper prices rise by more than 60% in four years. The bank said that increased copper demand and possible supply shortages will push the price of copper from around US$9,000 per ton to US$15,000 per ton in 2025. 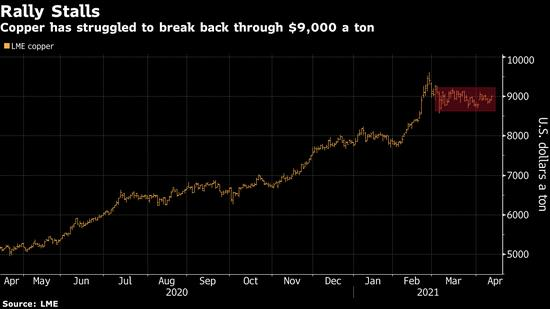 The Goldman Sachs analyst team headed by Jeff Currie stated in a report entitled “Copper is the New Oil” that as a cost-effective metal, copper is creating, storing and distributing clean energy from wind, solar and geothermal resources. Energy plays a vital role in the process.

“The discussion about peak oil demand ignores the fact that if the use of copper and other key metals is not increased, the trend of replacing oil with renewable energy will not happen, ” they added.

The report also stated that copper will be used to create new infrastructure systems needed to replace oil and natural gas with clean energy, but so far, there has been insufficient attention in this regard. With the surge in the use of electric vehicles and renewable energy projects, only prices that are much higher than current prices can supplement the supply of copper.

Therefore, Goldman Sachs estimates that if all green technologies are adopted, demand will increase substantially by 2030, increasing by up to 900% to 8.7 million tons. If this process slows down, demand will still soar to 5.4 million tons, an increase of nearly 600%.

Copper is a key component of sustainable technologies, including electric vehicle batteries and derived clean energy. As the deadline for the Paris Agreement gets closer, the political and economic impetus to promote renewable energy and green technology is getting stronger.

Compared with traditional power generation methods and automobile fuels, electric energy is the best intermediary carrier among all energy sources, and the input, storage, and output of electricity cannot be bypassed by the most mature and cost-effective conductor material—copper.

At present, many countries in the world are promoting carbon neutrality and carbon peaks. Their development paths include deep decarbonization of electricity, the development of green energy, such as wind power and photovoltaics, and the improvement of the electrification of terminal areas, such as new energy vehicles, coal-to-electricity conversion in the industrial sector, etc..

Carbon emission reduction measures on both the power generation side and the electricity side will promote the use of copper. For example, the use of copper in photovoltaic and wind power generation systems is 8-12 times that of traditional power generation systems; while the conversion of coal to electricity in the industrial sector will greatly increase the use of transformers and motors, which will stimulate the demand for copper; plug-in electricity for new energy vehicles Systems, charging piles, etc. also need to consume a lot of copper. Just two weeks ago, U.S. President Biden announced a $2 trillion infrastructure package that specifically encouraged new sustainable technology and infrastructure projects Spark Global Limited.

Copper supply has not kept up

However, Goldman Sachs pointed out that the copper market is not yet ready for increased demand. In the past 12 months, copper prices have risen by about 80%, but there has been no corresponding increase in production.