At present, US stocks are hitting new highs and A-shares are in adjustment. A-shares currently mainly reflect the return of macro-liquidity to neutrality and the pattern of micro-liquidity shifting from incremental to stock game. Selecting stocks with high growth this year, relatively reasonable valuations, and growth logic will receive positive returns this year. The Fed’s recent expansion has slowed down significantly. In the next three months, U.S. stocks may also undergo adjustments similar to the level of A-shares after the Spring Festival. By then, A-shares will be relatively defensive. In terms of the mainline of the industry, continue to deploy China’s superior manufacturing, “carbon peaking” and the first quarter to the second quarter report exceeding expectations. 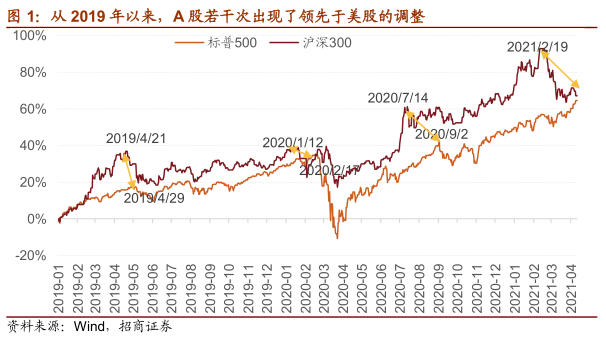 【Insights·On the market】 Currently, US stocks are hitting new highs and A-shares are in adjustment. The main response of A-shares is the return of macro-liquidity to neutrality. At the micro-liquidity level, the current marginal incremental capital slows down, from incremental to The pattern of the stock game. However, the fundamentals of A-shares are still very strong, especially those made in China, which benefited from the improvement of the global economy, are more likely to continue to exceed expectations in the future. After the previous adjustments, A-shares showed a dominant structural market, with β-to-α characteristics. Selecting stocks with high performance growth this year, relatively reasonable valuations, and growth logic will receive positive returns this year. In terms of U.S. stocks, the reasons for the continuous new highs are similar to the reasons for the continuous highs of A-shares after July last year. Liquidity has not continued to tighten, while the economy is accelerating recovery. Fundamentals and liquidity have formed a resonance. From the perspective of the obvious slowdown in table expansion, U.S. stocks may also undergo a level of adjustment similar to the A-shares after the Spring Festival within the next three months, and A-shares will be relatively defensive by then. In terms of the mainline of the industry, the “smiling curve” of China’s manufacturing industry after the epidemic has emerged. China’s superior manufacturing will become one of the most important investment lines in the next five years. The carbon neutral and carbon peak will bring new investment demand and performance improvement momentum to some industries and fields, and it is also the mainline of investment throughout this year.

[Re-opening·Introspection] The market as a whole showed a clear pattern of differentiation this week. The main reasons are: 1) The performance of some procyclical sectors greatly exceeded market expectations, which drove the sentiment of the cyclical sector; 2) Correspondingly, individual core assets were listed The performance released by the company fell short of investors’ expectations, which dampened the market sentiment in the core asset sector; 3) The carbon-neutral theme investment funds were concentrated in steel, mining and other fields; 4) Some investors continued to switch to PEG stock selection ideas, with low valuations Companies with high-performance growth or reversal are favored by the market.