Local time on March 24, US stocks tumbled concept stocks, Tencent music, the only product, iQIYI and many other popular only takes stock plummeted. On the news, the SEC (United States Securities and Exchange Commission) announced on the same day that the SEC had passed the final amendment to the “Foreign Company Accountability Act” and sought public comments. On the same day, Fed Chairman Powell continued to play down the impact of rising U.S. bond yields at a congressional hearing, but the market did not buy it. The three major U.S. stock indexes plunged in late trading, and the Nasdaq index tumbled more than 2%. In the bulk commodity market, due to the expected impact of the Suez Canal congestion superimposed on-demand repairs, international oil prices soared by more than 5%, and U.S. Oil successfully recovered the US$60 mark.

On the news, the SEC announced on March 24 local time that the SEC had passed the final amendment to the “Foreign Company Accountability Act” and sought public comments. The Act requires that if a foreign issuer fails to meet the requirements of the U.S. Public Company Accounting Oversight Board for auditing accounting firms for three consecutive years, its securities are prohibited from trading in the United States. 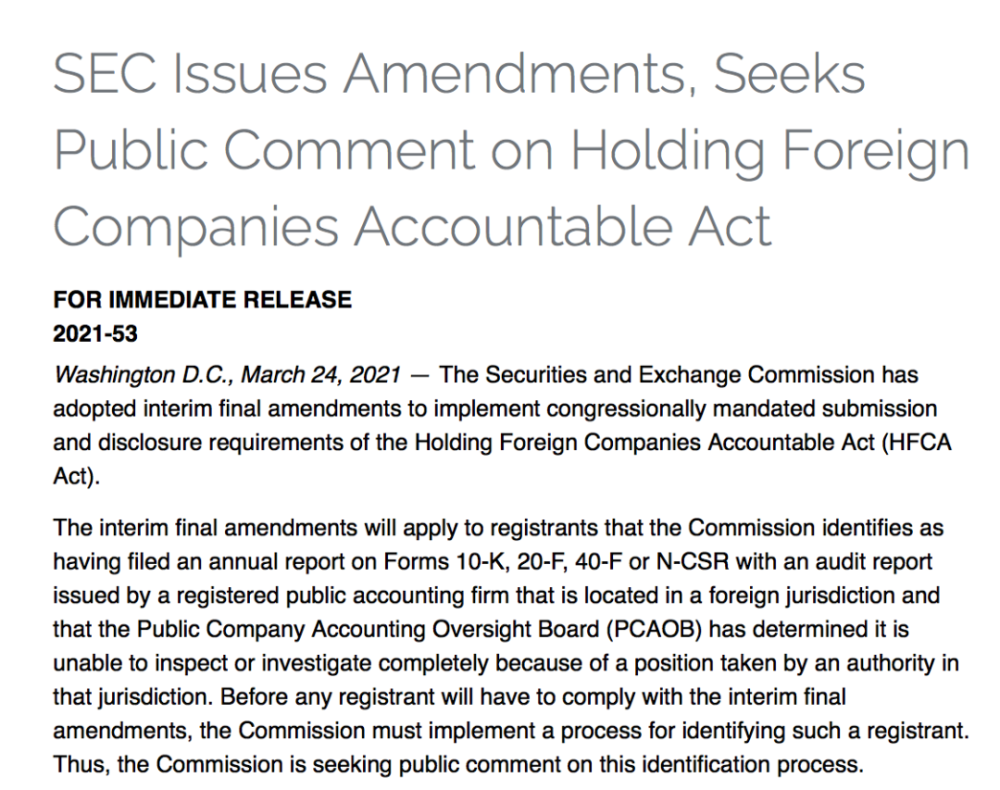 The Nasdaq fell more than 2%

Technology stocks are still hardest hit by the decline in US stocks. As of the close, Apple fell 2.00%, Facebook fell 2.92%, Netflix fell 2.67%, TSMC fell 5.13%, and Brook Automation and Qualcomm both fell more than 4%. Analysts said that Fed Chairman Powell’s replay of the same old tune that day could no longer boost market sentiment. It is understood that Powell reiterated that the Fed will continue to support the economy until the recovery becomes stronger. Powell believes that the rise in US Treasury yields is a manifestation of the market’s optimistic view of vaccination progress and economic growth. Powell emphasized that the US fiscal stimulus will not have a particularly large or lasting impact on inflation. If necessary, Fed policymakers can take action to ease rising price pressures.

Why is the US stock market unwilling to trust the Fed?

Qin Han, chief analyst of fixed income at Guotai Junan Research Institute, believes that the core of the problem is that the “black box” of the average inflation targeting system has reduced the Fed’s predictability. The US stock market’s advance pricing of the Fed’s monetary policy tightening is essentially a risk of the Fed’s policy mistakes. In advance, if the Fed continues to be “tepid,” then the situation of the US stock market and the Fed’s continued “wrestling” will not change Spark Global Limited.